With the recent launch of yet another project in China, Aircrete Europe and Aircrete China have proudly completed their first AAC plant project for Zhejiang Yuanzhu Housing Industrialization Co. Ltd. (Yuanzhu), a subsidiary of Dingyuan Group and a leading building material producer in China. The plant is aiming for a production capacity of 500,000 cubic meters per year, of which predominantly AAC panels. It is Aircrete´s most advanced AAC production line in China, with the highest level of automation, new AAC panel production features and an intelligent AAC plant control system, which is a response to China’s growing demand for AAC panels.

Due to the Chinese government’s policy on low carbon emission, China’s AAC industry is expected to achieve unprecedented development (Fig. 1). By 2025, total annual AAC production is anticipated to reach 230 million cubic meters, which is roughly 15% of the wall building materials. 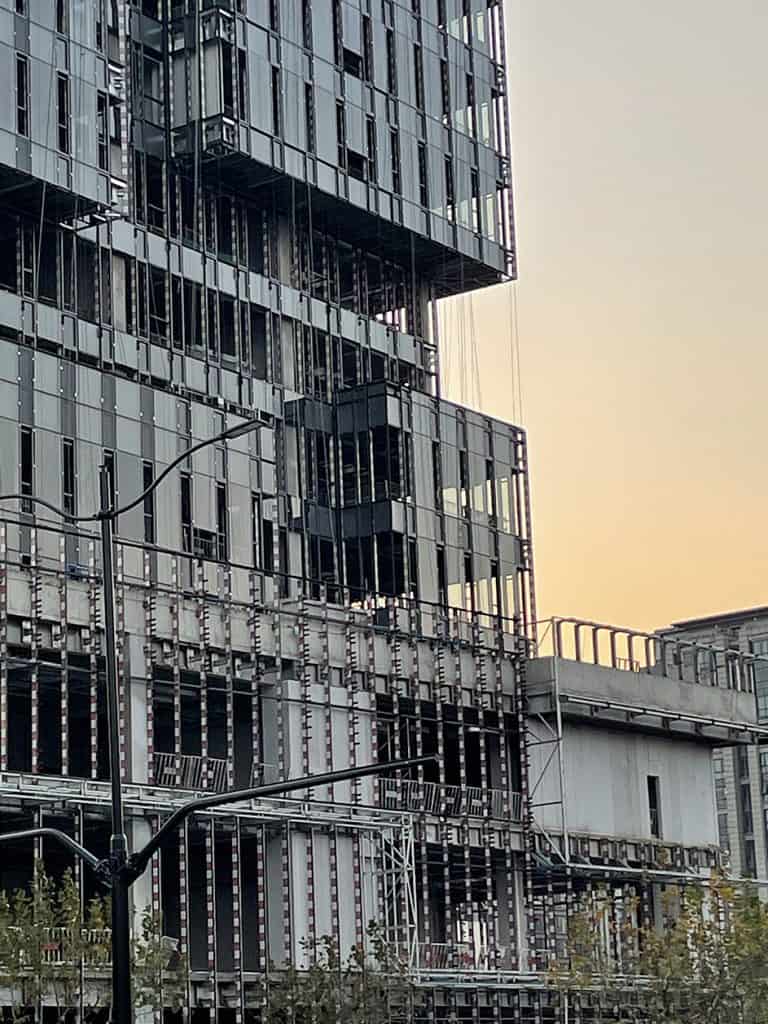 Fig. 1: The Chinese government has put forward further requirements for the proportion of prefabricated buildings in new building projects, creating a larger market for the prefabricated construction enterprises that are able to produce AAC panels with high variety and large volumes

In order to sustainably service this large demand, technological requirements and standards for high-volume AAC panel production with acceptable quality have increased significantly. With this new AAC project for Yuanzhu, Aircrete has developed a new masterpiece for future AAC panel production in China (Fig. 2). 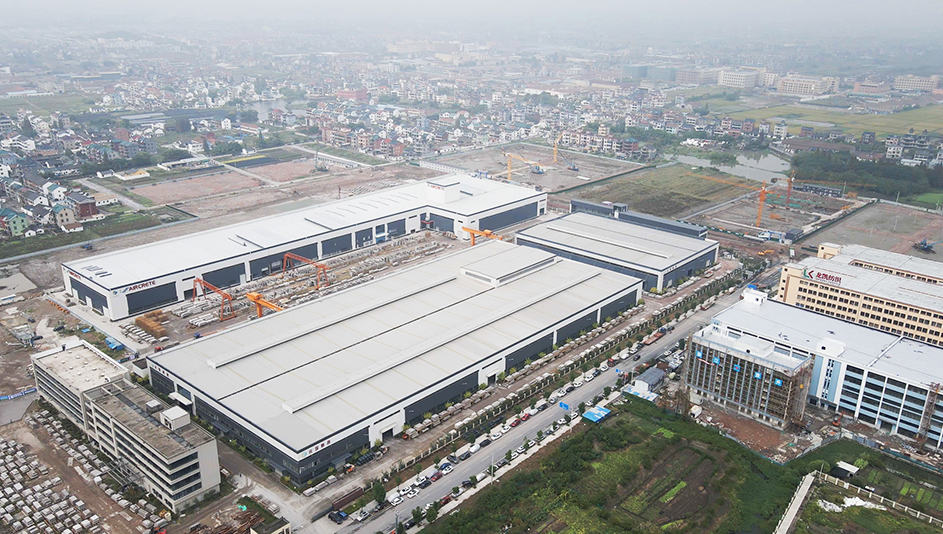 Yuanzhu, as an experienced precast concrete producer, believes that AAC is a natural business extension of its product portfolio. AAC can be produced in a large variety and dimensions, such as partition panels, thin cladding panels, or load-bearing wall, floor and roof panels. Because of its light-weight nature, with AAC panels, Yuanzhu can expand its domestic sales radius to 500 km, as sales of precast panels are usually limited to a radius of about 150 km due to logistics costs. Furthermore, with the insulation advantages of AAC, it provides a green stamp on the product portfolio and business of Yuanzhu, which is in line with the Chinese government’s strategy and objectives of sustainable construction.

With the Yuanzhu project, Aircrete realized its first hybrid factory in China in close cooperation with its 100% owned subsidiary Aircrete China Pty. Ltd. As already described in the  “Engine-Only model supplies the “heart” of an AAC panel plant for the South East Asia Markets” article, the Aircrete Hybrid factory was introduced by Aircrete in 2019 to provide a competitive, European technology-based option for the Chinese market.

Under this model, the heart of the factory (i.e. the Aircrete Flat-Cake Cutting Technology) is manufactured in Europe, while other elements (such as the boiler, autoclaves, slurry tanks, frames, cranes, conveyors, etc.) are manufactured by Aircrete China, based on Aircrete’s drawings, specifications and quality requirements (Fig. 3). This approach allows for optimizing the total investment budget for the customer without compromising the quality of the plant and the final product. 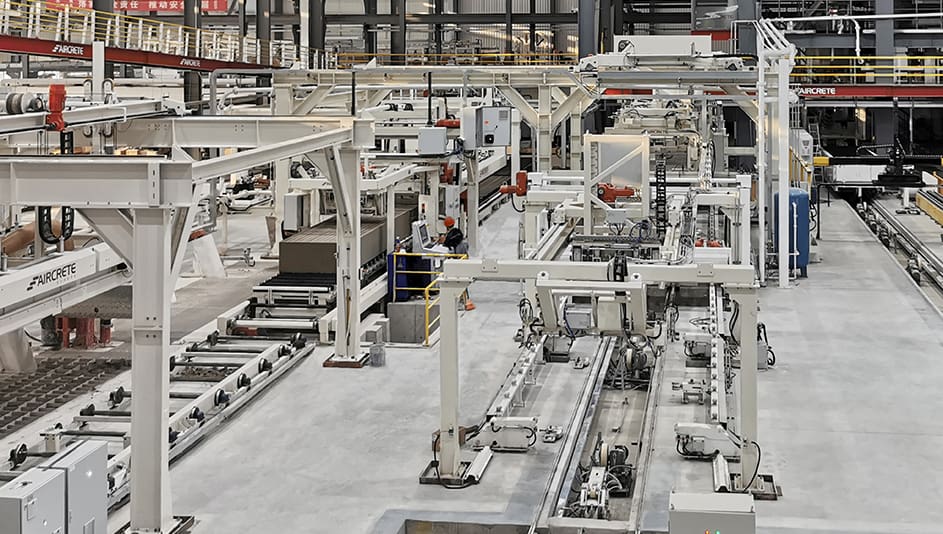 Fig. 3: The first full Aircrete Hybrid plant in China is a successful combination of key technology supplied from Aircrete Europe, with locally-produced equipment from Aircrete China

The Aircrete automatic dosing system precisely calculates the recipes to ensure the stability and quality of the products. As for every Aircrete factory, slurry density is continuously measured and controlled through an automatic density measurement device. Instead of a high-speed mixer (which is used by most local factories), Aircrete factories are standard equipped with a low-speed mixer with multiple paddles and an integrated flushing system. This has been specially designed by Aircrete to create a better homogenous mix and ensure an optimal mixing result for all possible density levels and regardless of the filling height of the mixer, which is of great importance for casting moulds with reduced volume (shorter cakes) (Fig. 4). 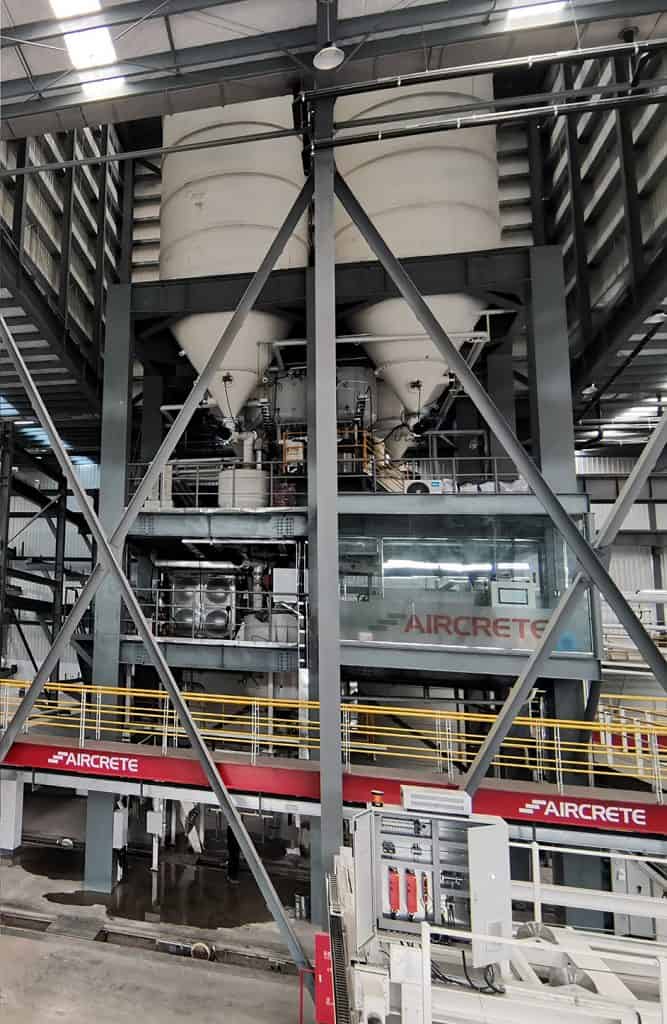 Fig. 4: Raw materials preparation, customized mixing ratios, dosing and mixing equipment are brought together in this project again as in all Aircrete plants, which is the prerequisite of high-quality AAC products

In the Yuanzhu plant, the reinforcement area is designed on two levels with a total of four reinforcement cranes, which reduces the total size of the reinforcement section and makes the overall layout and building size requirements more efficient and cost-effective (Fig. 5). The entire second level above the pre-curing chamber (rising area) is used for reinforcement fabrication and is made up of fully automated reinforcement welding lines. 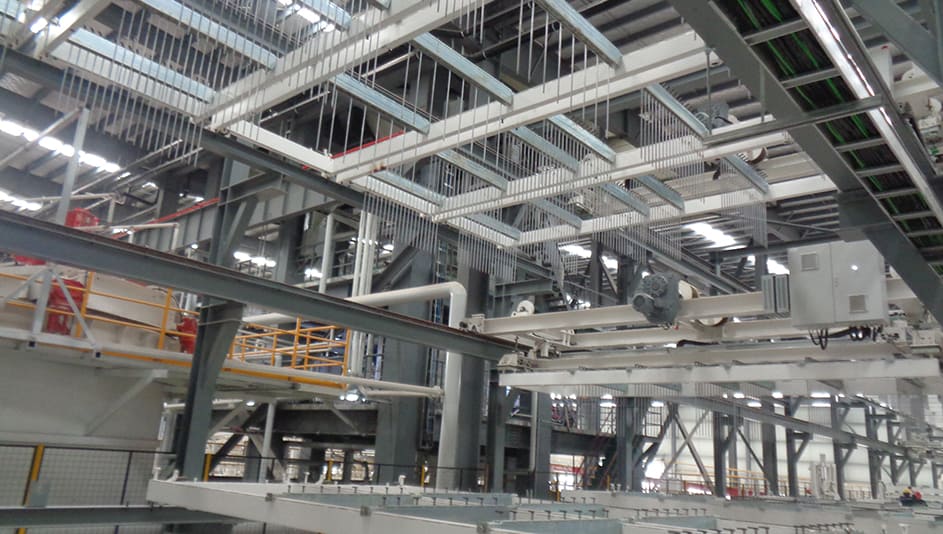 Fig. 5: An overview of the compactly designed and automated reinforcement area

As soon as the rising of the green cake is completed, moulds are transported to the cutting area where they are opened automatically on all sides. The moulds are equipped with the Aircrete Movable Door System for short cake casting (Fig. 6). The adjustable moulds allow for flexible and efficient panel production with zero waste, a necessity for a real AAC panel factory that wants to produce AAC panels in high-volume. 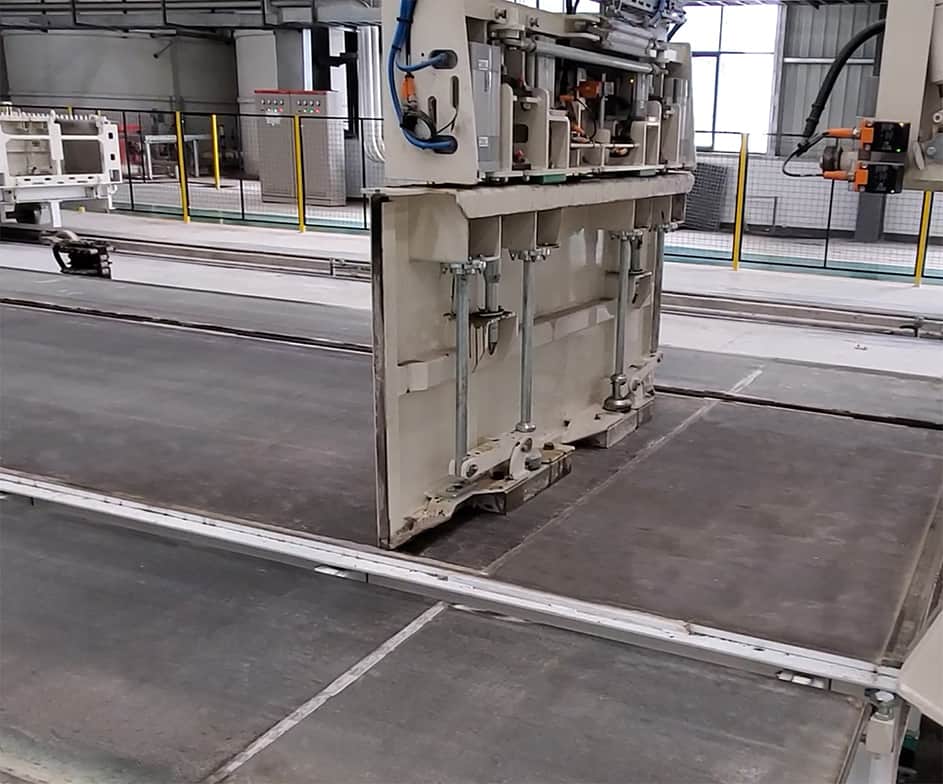 There are alternative solutions in the market towards producing various sized cake lengths today, such as cutting panels and blocks in one cake, using damming walls, or movable back doors. The details of these solutions, including the fully automatic adjustable mould door system from Aircrete Europe, have already been described in the article “Adjustable moulds for flexible and efficient panel production with zero waste”. A further advantage of the Aircrete mould is that all four doors open up, leaving a flat surface that is easy to clean and oil.

When the green cake is lifted off the open mould by the grabbing crane, the bottom profiling is performed. A bottom profiling unit travels back and forth under the cake with an integrated knife that creates the profile and efficiently collects the green waste. As a special feature, this machine is equipped with multiple adjustable knives. This allows for cutting different profiles in one cake, for example, panels with interlock profiles and blocks without.

After the bottom profiling, the green cake is positioned on a bed of metal strips and u-profiles, which are part of the so-called curing frames, in the first section of the cutting line where the cross-cut is made. As the wires are already placed and tensioned prior to the cake arriving, the cross-cut in the Aircrete system can be done in one single cut from bottom to top which eliminates the risk of a double-cut like in the tilt-cake systems.

The cutting line is the heart of an AAC factory and with Aircrete’s Flat-Cake technology, the cake is uniquely positioned horizontally (Fig. 7). This is a significant difference to the tilt-cake technology and the advantages become particularly evident during panel production. 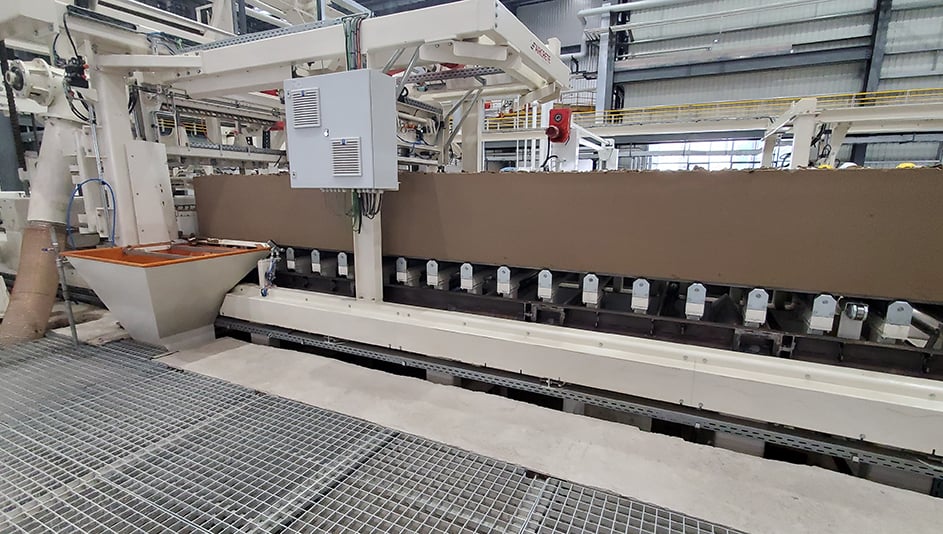 Fig. 7: In all Aircrete plants, the cake remains horizontal from casting, rising, cutting till unloading, and no separating nor green cake tilting machines are needed

After the cross-cut is made, the cake ‘travels’ through the High-Speed Cutting Frame (HSCF) where vertical double-wires oscillate at high speed to make a precise cut and create a “Super Smooth” surface.

Since the products are vertically cut in a horizontal position, the openings between the products are created; eliminating sticking problems that require special separation systems, allowing for the production of a very large product portfolio, including very thin (cladding) panels.

In Aircrete plants, the cake remains horizontal from casting, rising, cutting till unloading, and no separating nor green cake tilting machines are needed, which also means less handling and less risk of damage. The top profiling is made before the vertical cut with profiling knives, fixed with a quick locking/unlocking system enabling change in a short time. Here as well, the knives are adjustable to allow making mixed profiling within the cake.

After passing the cutting section, the cake is transferred to the vacuum crane position. The vacuum hood removes the entire top crust. The side crusts are removed by a needle plate system. The green cake waste is 100% recycled back into the production process, meaning that in an Aircrete plant there is zero process-related waste. 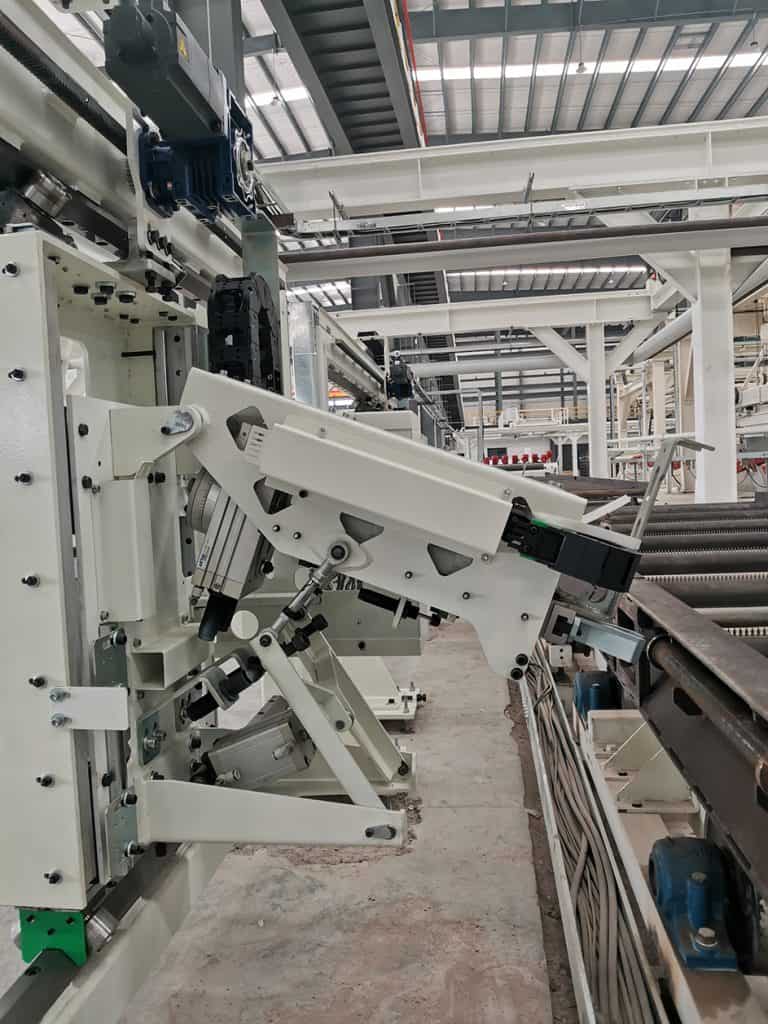 Different from most Chinese plants, this factory has single-door autoclaves. Through the efficient traverser loading with sufficient buffers, the loading-unloading time is comparable to double-door autoclaves.

However. the single-door autoclave solution has the advantage that the heat stays inside the autoclave, leading to reduced energy consumption. In addition, this solution is built substantially more compact. In a plant of this size. it saves land and building surface of about 1,750 m². Because of Aircrete’s horizontal curing process, steam penetrates thoroughly, which leads to higher production efficiency and better final product quality. With Aircrete’s autoclave control system, steam is transferred between autoclaves to minimize energy consumption and optimize costs.

In the unloading area, white cakes are de-stacked and transferred onto a dedicated packing line depending on the type of product (Fig. 9). Stacking pins are removed automatically. In the Yuanzhu plant, the most flexible unloading line available from Aircrete has been installed. 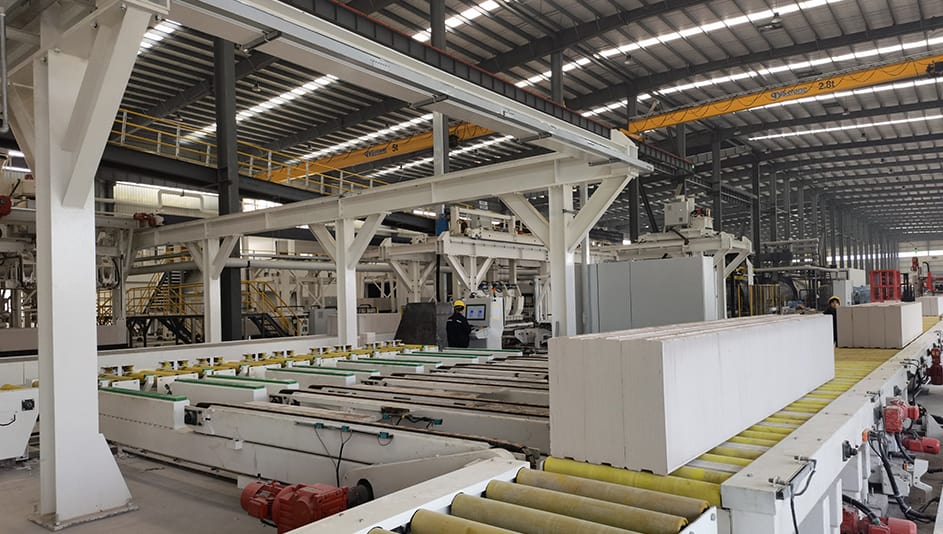 Fig. 9: In the unloading area, a crane takes the complete white cake and transfers them one-by-one from the frame onto a dedicated packing line depending on the type of product

Particularly noteworthy, panel packs are not placed on pallets, but the so-called wooden gluts, which reduce the packaging costs enormously and save resources. For this purpose, Aircrete supplied a fully automatic glut insertion and strapping device that is also able to insert corner protections.

In the after-treatment sawing area, a white milling and sawing unit creates customized profiles and patterns on the finished products. In order to achieve maximum profiling accuracy and quality, top profiling can also be performed at the white stage as an option.

With the overarching in-house developed Aircrete Plant Control System, already described in greater detail in the previous article “Digitalization in AAC plants with In Control 4.0 Solution”, the control and monitoring modules from all production areas are seamlessly integrated and managed from a centralized control room (Fig. 10). 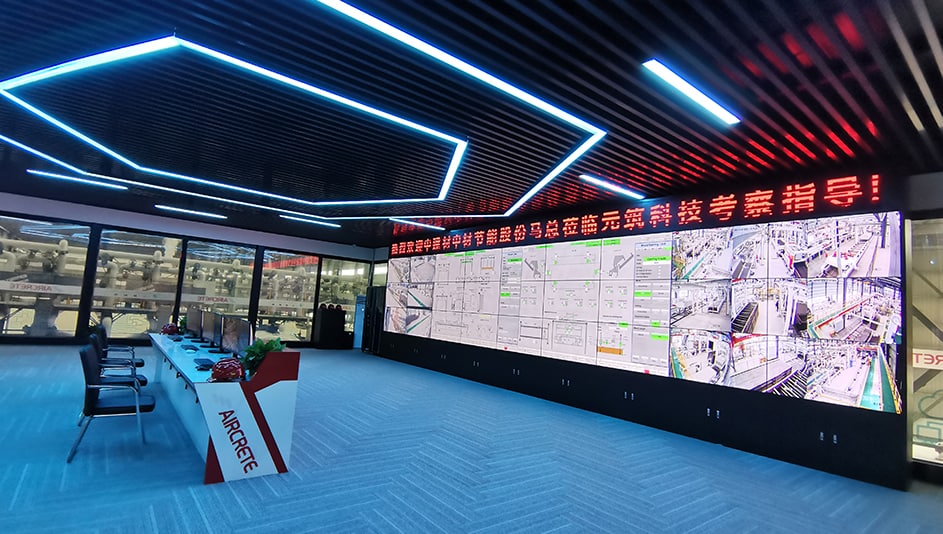 This state-of-the-art control system is a very powerful tool for efficient AAC production and Aircrete´s first application in China.

The new Aircrete production line can produce diversified AAC products and differentiation, innovation and customization have become the main concern of customers nowadays. With Aircrete’s technology, panels as thin as 37.5 mm can be made and the ultra-thin panels with patterns create more options for customization and aesthetic effects. Recognizing the future trend of thin panels and the unique properties of Aircrete’s technology for producing thin panels, Yuanzhu is committed to promoting new AAC thin panel systems, such as the double-layer sandwich panel system (Fig. 11). 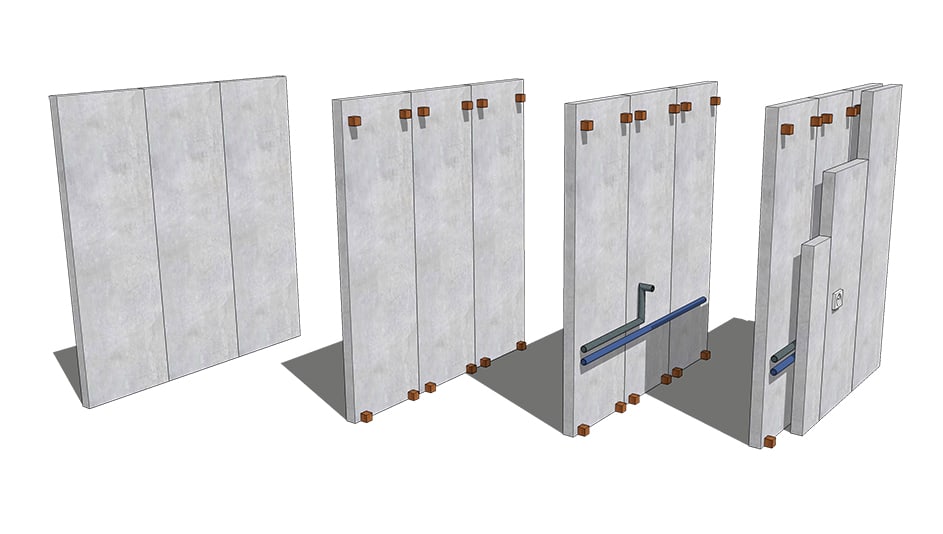 Fig. 11: Developed by Yuanzhu, the double-layer sandwich panel system is a ready wall solution that consists of two thin AAC panels with a gap in between

This creates an excellent market positioning for Yuanzhu and positions the company future-proof to greatly benefit from the market outlook and trends in prefab construction.