The Chinese construction market outlook is very positive with autoclaved lightweight concrete (AAC) – also referred to as autoclaved lightweight concrete (ALC) – outperforming the overall market, as contractors and developers are increasingly switching to AAC as the preferred building material. Increasing urbanization and welfare standards in China result in a large demand for new residential and commercial construction and therefore require an even more efficient way of construction than before.

China’s construction industry has seen rapid expansion since the country began to implement the reform and opening-up policy in 1978. The value-added output of the industry reached 5.57 trillion Yuan (about 816.6 billion U.S. dollars) in 2017, compared with only about 13.9 billion Yuan in 1978. The average annual growth rate was 16.6 %, as per the National Bureau of Statistics (NBS) data. The value-added output of the industry accounted for 3.8 % of the country’s GDP in 1978, while the proportion rose to 6.7 % in 2017. The number of construction companies saw fast growth, reaching more than 300,000 last year (Figure 1). 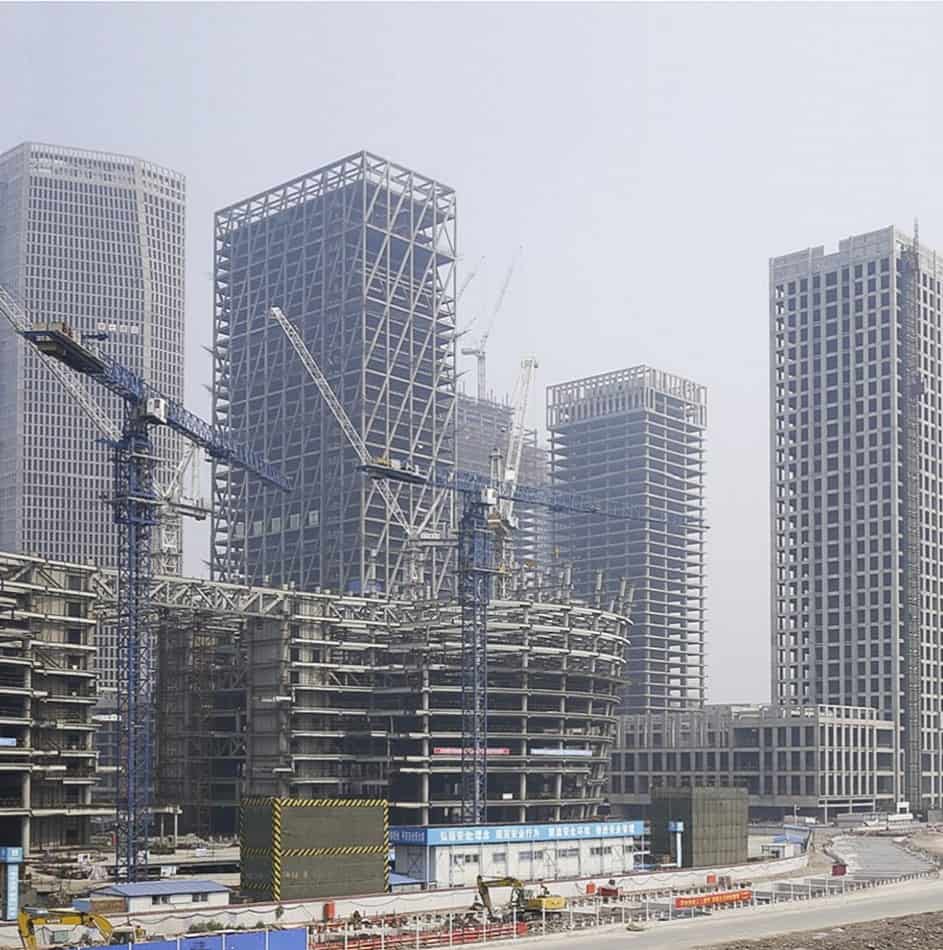 Taking commercial interest into account, builders and developers, focus more on cost-effective construction which requires fast, easily installed, recyclable, versatile and less labour-intensive building systems globally. This resulted in a switch from block-and-brick-based construction to prefabricated elements. The Chinese market follows this global trend as well and furthermore, the initiative is backed by the State Council People’s Republic of China officially. The Council targets a 30% adoption rate of prefabricated solutions before 2020 and has urged efforts to develop related standards, promote integrated architectural design, create a strong building components industry, increase the use of green materials, and ensure project quality for prefab construction. Therefore, the switch from the well-accepted AAC block to AAC panels is a natural choice. 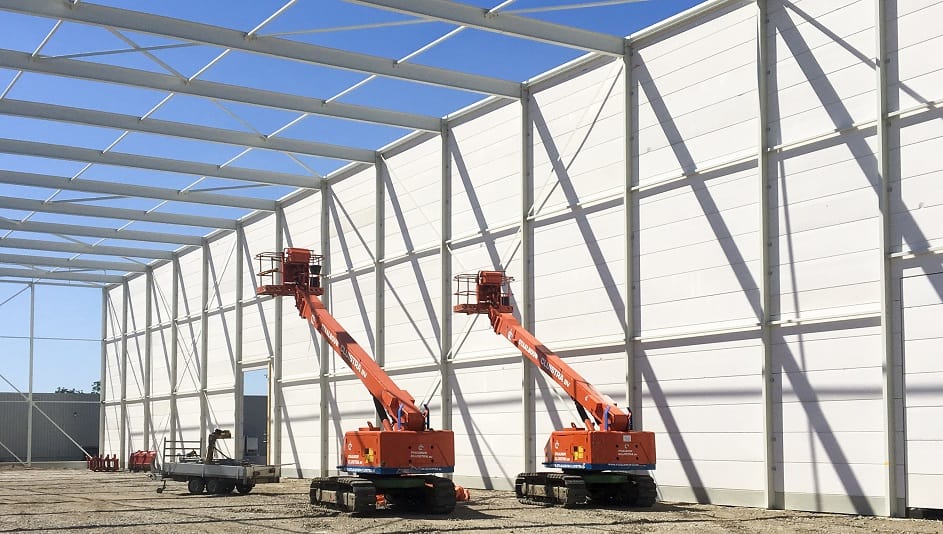 Figure 2: AAC panels are the perfect basis of a beneficial building system for modular, fast and eco-friendly constructions

China consumes a high volume of AAC products, majorly attributed to the growing population, rapid rate of urbanization and an increasing number of building construction projects. Further, the Chinese AAC market is anticipated to grow at a significant rate and register the highest CAGR during the forecast period of 2024. This growing demand and the global shift to an AAC panel-based building solution has increased the requirement for the unique Aircrete Europe flat-cake AAC panel technology.  In addition, introducing innovative and high-automated technology in China is very much in line with the Chinese government’s official Made in China 2025 strategy. For this reason, Aircrete has introduced its Aircrete Hybrid Model, whereby the total investment is strongly reduced without compromising the quality of the final AAC panels and blocks.

Within the Aircrete Hybrid Model, solely the core cutting technology and the process know-how is provided from Europe. (Figure 3&4). The remaining elements of the plant are realised in cooperation with local Chinese partners, based on Aircrete specifications. This model offers a joint AAC panel production solution with the world`s leading panel technology in its core with an attractive investment level (Figure 5). Several such dedicated AAC panel plants, using the Aircrete “Engine”, are currently being constructed in China at the moment. 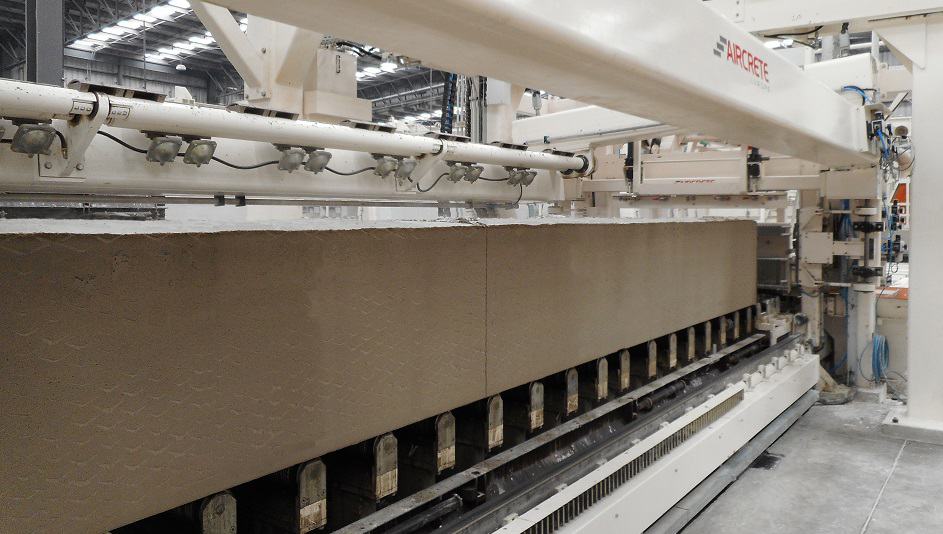 Figure 5: The main deliverables from Aircrete Europe for the “Engine-Only” model

The heart of an AAC Plant that comes from Aircrete Hybrid Model: the Aircrete Cutting Line

Especially for low density (< 300 kg/m3), the ultra-thin reinforced cladding panel production and super smooth product surface, the process technology of the AAC plant plays a significant role. The cutting process is often seen as the “heart” of the process as this is where the shape, tolerances and surface quality of the final products are defined.

In the unique flat-cake cake production technology, the green cake is cut vertically in a flat position thereby preventing any sticking problems after the autoclaving process (Figure 6). By using this system, there is no need for an extra separating machine or splitter to separate the hardened products layer by layer, which reduces the risk of breakage. Researches revealed that gaps left by the cut in the cake, reduce time and the energy consumption of the autoclaving process due to the easy spread of heat. Experience also shows that production losses and breakage are very low with the Aircrete Cutting Technology. 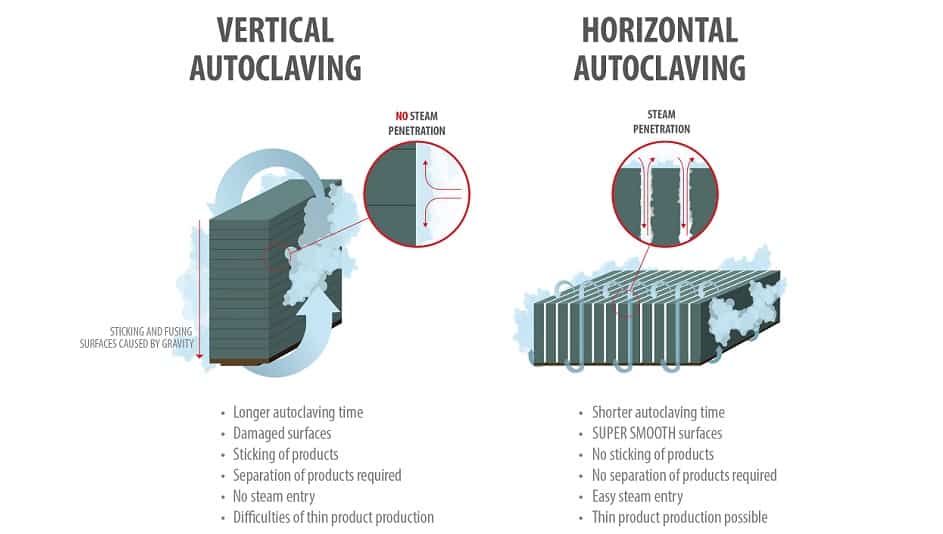 A further advantage of this system is that the amount of handling is reduced. The system produces no bottom (or bed) waste layer, which needs to be removed (Figure 7). More modern tilt-cake systems have a back-tilting system whereby they can remove the bed waste in the green, as well as a green separation machine. However, all of this additional handling, increases the risk of damaging the green cake, which is still very soft and vulnerable at that point in time.

Figure 7: The significantly low number of steps in Aircrete Flat-CakeSystem are easy to manage

This characteristic Aircrete Cutting Technology is based on the proven double vertical long cut wires, the horizontal-vertical moving cross-cut wires and the horizontal moving of top and or middle cut wires.  For the top and bottom cutting also the profiling knives can be used.

The key factor of the system is the High-Speed Cutting Frame (Figure 8&9) with double wires in the vertical long cut to produce Super Smooth surface and precise thickness panels (40 mm). This development opens new applications for faster and better building with Aircrete products, namely the Aircrete Building System. The stability of the process offers a relatively long open time between cast to cut. This is an essential advantage where production flexibility is requested (Figure 10). 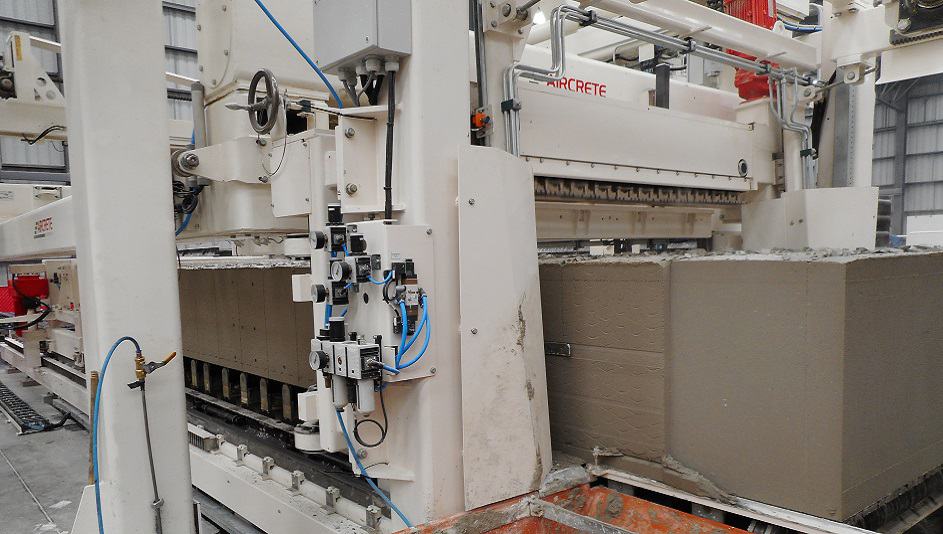 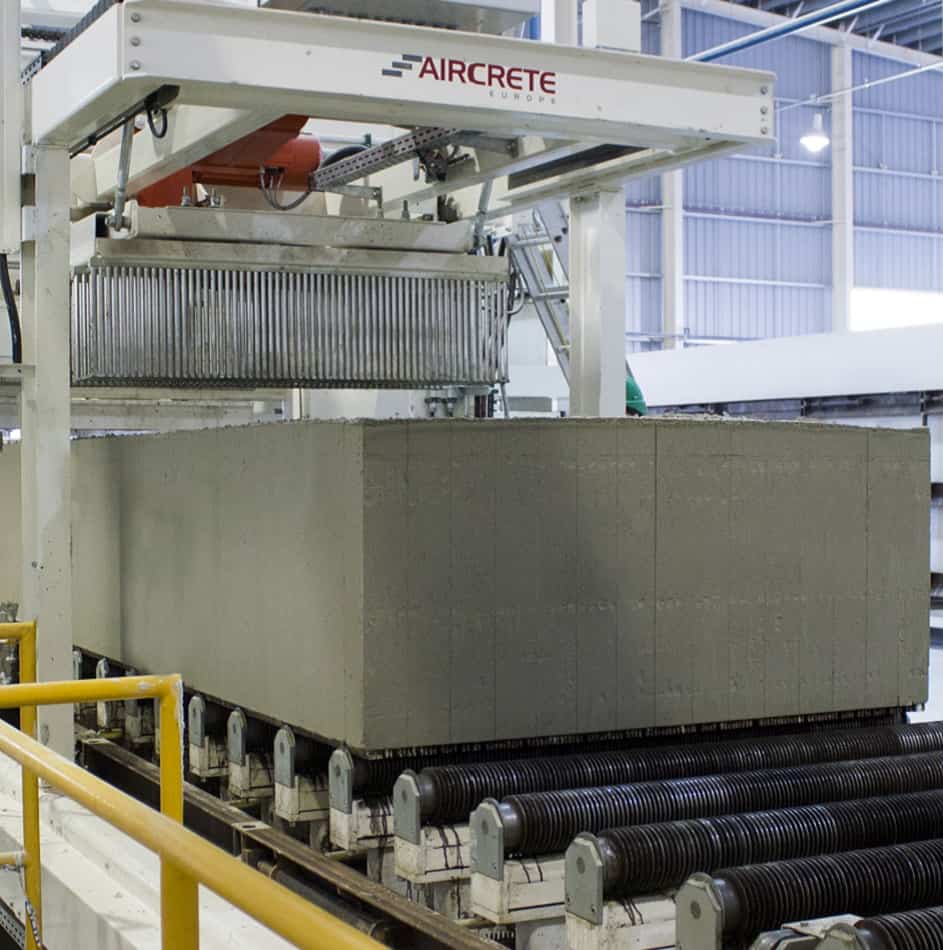 Fig. 10: Aircrete Flat-Cake is the superior technology for panel production

In order to ensure that the integration is done as smoothly as possible, the “Engine” is supplied as a “black-box” meaning that there are basically only four interfaces. In this case, it is the input-side of the mould, where the mould is inserted from the pre-curing area and the output-side of the mould, after this has been cleaned, oiled and closed. On the other side is the input-side of the empty cooking frame and then the output-side of the cooking frame with the finished cut cake. The entire Aircrete scope comes with its own advanced control system and the entire “Engine” is fully erected and tested in Europe before shipment.

Next to the cutting line, the typical “Engine-Only” package also includes the special Aircrete Slow Speed Mixer. This is a special multi-paddle design, which acts as a shear-mixer with long fixed paddles on the wall of the mixer (Figure 11). The main advantage of this mixer is that one achieves a very homogenous mix, especially with varying filling volumes in the mixer, which is the case in panel plants using a damming wall to shorten the mould (Figure 12). In addition, the lifetime of the paddles is about 5-8 years, whereas, with the typical high-speed mixers, these require to be exchanged after a few months. 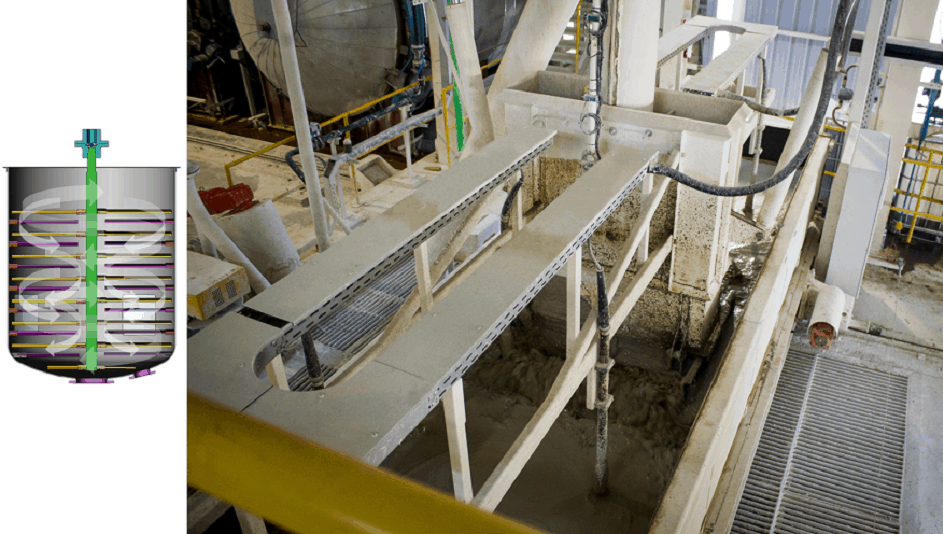 Figure 11 &12: The Aircrete Slow Speed Mixer ensures a homogeneous mix and the filling of the mould is the key to achieving a good AAC cake

Of course, Aircrete can also supply other core technology, such as special unloading and packaging systems for the thin panels and the after-treatment lines, such as sawing and surface milling. Especially the surface miles cladding panels are continuously growing in demand (Figure 13). 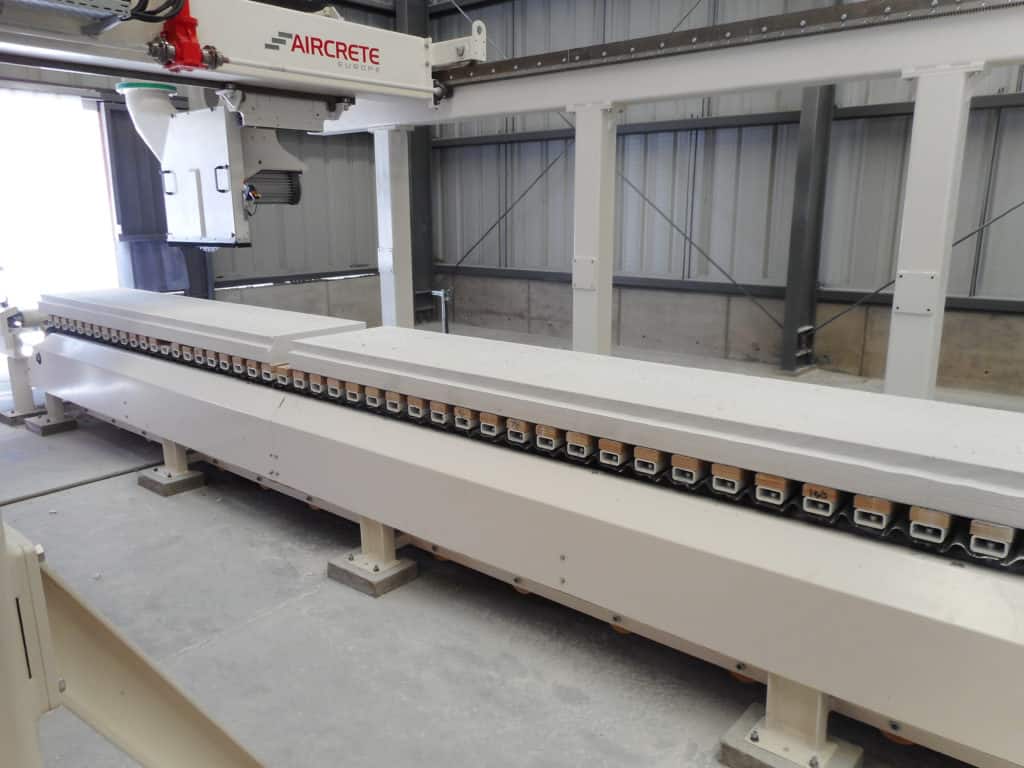 Plants equipped with Aircrete cutting technology are able to produce the largest variety of AAC products, including partition panels, thin cladding panels (40 mm) (Figure 14) and load-bearing lintels, roof, floor, wall panels and blocks (TLMB standard). Furthermore, AAC panels produced on Aircrete technology are characterized by a Super Smooth surface, which will minimize the finishing requirements of installed AAC walls. These unmatched features of products are the key elements of the Aircrete Building System. 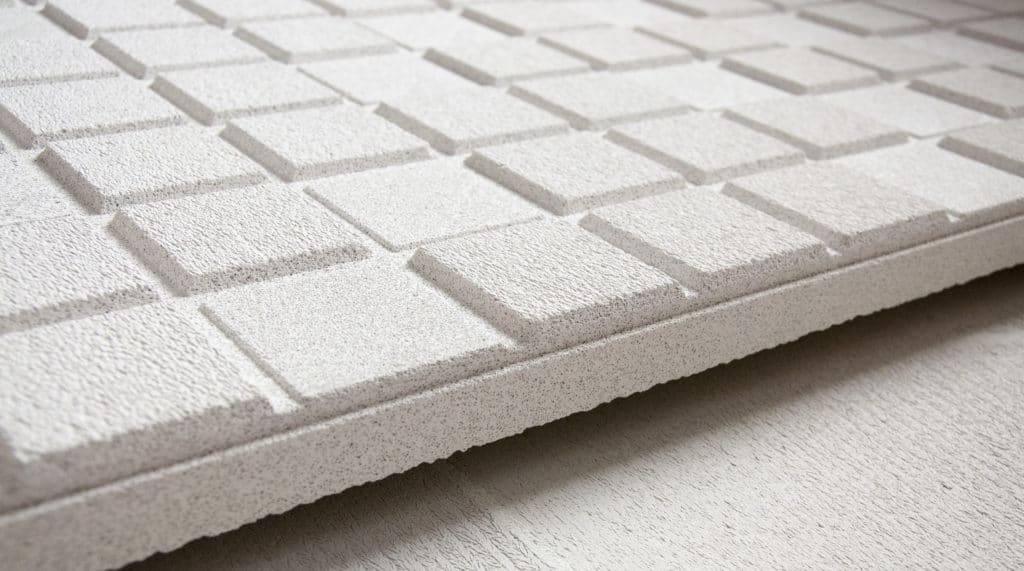